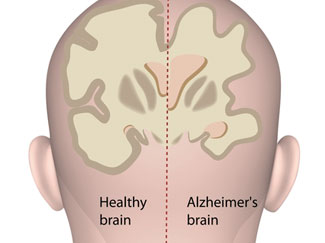 A buccal swab DNA test can identify which APOE alleles a person has. This allows for the identification of individuals who carry the APOE e4 allele and have an increased risk of developing Late-Onset Alzheimer’s disease. However, this also does not allow for a definitive diagnosis as it only indicates whether or not there is an increased risk.

Diagnosis of Alzheimer’s includes several steps that may be repeated over time to establish changes in the patient’s cognitive functions. These diagnostic steps include obtaining a thorough understanding of the patient’s overall health, medical history, ability to carry out normal activities and any changes in personality and behavior. Standard medical tests (e.g. blood and urine analysis) and brain scans are conducted to rule out other possible causes of memory loss. Detailed tests of memory, problem solving, attention, counting and language are taken to analyze cognitive function. Neuroimaging is used to identify gross cerebral cortical atrophy and diffuse cerebral hypometabolism.